Small but perfectly formed, The Bodega is celebrating its well earned reputation as Nottingham’s go to venue for catching acts on the way up with a special 20th birthday weekender.

The artists who have passed through its intimate room over the last 20 years make for impressive reading. The Strokes, The White Stripes, Arctic Monkeys, The xx, Scissor Sisters, Florence and The Machine, The 1975, Easy Life and Slowthai are just some of the better known names to have played the 220 capacity venue.

Now the Nottingham institution is marking its birthday with a special series of shows and DJ sets. Headline acts from The Orielles (Thursday 28 November, sold out) and Stealing Sheep (Saturday 30 November) nod to its history with the Heavenly Records, while Kagoule (Sunday 1 December) is one of a raft of homegrown bands to have gone on to bigger things after showing off their artistic chops at the venue.

Cai Burns, Kagoule, said: “We feel very honoured to have been asked to headline The Bodega 20th anniversary show alongside some of our favourite Nottingham bands. It has been a kind of spiritual home for us over the years and has been an integral part of ours, and many others, growth as musicians. We are truly looking forward to celebrating its legacy on 1st December.”

Bodega’s Sam Keirl said: “It’s crazy to think of bands playing to a couple of hundred people in Nottingham and then a couple of years later they can be headlining Glastonbury. It’s very exciting to see who will be next! With a gig on most nights, we see a lot of amazing bands, some go on to huge things and some stay underground hidden gems.”

The Nottingham music scene has also benefited from the nurturing environment of The Bodega from Saint Raymond getting a top 10 album to Amber Run touring the US, while upcoming band Do Nothing have spent a lot of their formative years within its four walls honing their performance skills.

Club nights have also played an important part in the appeal of the bar, club and music venue with the legendary Pop Confessional taking place every Friday since its inception in 2006. 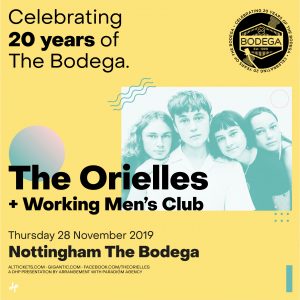 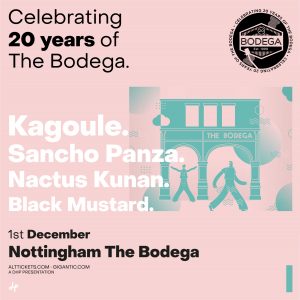