In: Dot To Dot

Dot To Dot Festival, the award-winning festival with a reputation for bringing the hottest new talent to city-centre stages, have added a further 25 artists for their 2022 event, taking place on 28th and 29th May 2022 in Bristol and Nottingham respectively.

FEET burst onto the scene, fresh out of Coventry University, in 2019 with What’s Inside Is More Than Just Ham; an album brimming with earwormy hooks and moments of wonky, idiosyncratic excitement that earned them high praise from the likes of NME, DIY and Radio 1.  Post-lockdown, the band have comeback with Peace & Quiet, a boisterous single that maintains their playfulness but streamlines it into something more direct, a genre they’ve labelled as “Crease Pop”.  Expect hooky choruses that maintain an edge without self-indulgence.

Fresh from their latest release, Familiarise Yourself With Your Closest Exit in March, SWIM DEEP have also joined the line-up for Dot To Dot’s 2022 edition.  The EP featured collaborations with Mancunian singer Phoebe Green, Brisbane based dream-pop artist Hatchie and Thai duo Dept.  The Birmingham-formed band have been touring the UK, Europe, America and Asia consistently over the last 8 years, drawing on influences from Thailand in particular for their dreamy musical output.

With recently released sophomore album, We Live Here, under their belts, Grime-punk duo BOB VYLAN join the line up, too. Their poignant lyrics tackle and offer a stark criticism of racism in the UK, over a mix of urgent metal guitars and trap beats.  There are not many bands that blur the lines between punk and grime as effectively as the London pair, outspoken and engrossing in equal measure, their lyrics effectively convey angst towards the system.

Multi-hyphenate JESSICA WINTER sits outside genre, scene or group, defined not by sound but by song. Jessica’s inspiration is drawn from robust daily experience and traverses sounds from the 80s to present day. Previously supported by Dazed, Radio 1, and 6Music, as well as touring with genre-defying Death Grips and Lynks, Jessica Winter is one to watch at D2D.

Dot To Dot Festival prides itself on seeking out the freshest emerging musical talent, with said ethos ringing true across the previously announced 2022 line-up through to these latest additions.  Director of Live at festival organiser DHP Family, Anton Lockwood, said: “We’re extremely pleased with one of our most diverse line-ups to date.  I have always said that Dot To Dot is all about seeing your favourite band as headliner and your new favourite band earlier in the day.  That certainly looks set to ring true this year, and I’m looking forward to catching some of the earlier slots by artists that will no doubt be headlining in years to come.”

The tradition is of course front and centre with SQUID headlining the festival in Bristol and Nottingham.  The English post-punk band are currently riding high on the success of their debut album Bright Green Field, released to much critical acclaim last year, including a perfect-score review in NME and a 6th place ranking on Rough Trade’s albums of 2021.

Squid previously appeared further down the festival bill, performing in earlier slots on smaller stages at the 2019 event.  Dot To Dot Festival booker Joshua Ward reiterated that this approach is a major part of the festival’s ethos, saying: “D2D has always been about celebrating the best new musical talent on offer, and one of the best parts of that is seeing artists grow and develop from performing lower down our bills to becoming potential headliners.”

With “Early Bird” tickets now sold out, tickets for Dot To Dot are priced from £25 and available now through alt. tickets: www.alttickets.com 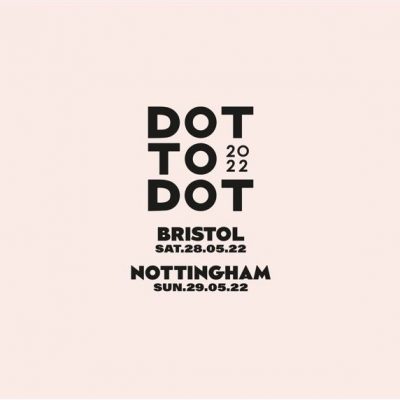